Gift of the Year

A few months ago my Blackberry Pearl took its last, finally fatal, tumble right outside The Ambassador Theater (where Chicago is showing) on W 49th St. I was so sad to see it go and I hadn't realized how much I had grown accustomed to its constant source of information until it was gone. I reluctantly stuck my SIM into my old Samsung and fell behind on my e-mail correspondence. Intentionally I expressed my woes to Brian, who really enjoys buying me cool tech stuff.

I was almost certain another sleek Pearl would show up at Christmas time. Especially when one evening a few weeks ago I was cleaning out Brian's coat, getting ready to hang it up. I put my hand inside one of the inside pockets and Brian suddenly yelled, "STOP!" My hand had touched something, but I wasn't sure what (definitely tech related) when I dropped it back into the dark pocket. I assumed it was a Pearl, but it hadn't felt like one.

Come Christmas morning Brian was full of surprises! Brian gave me two gifts. The first was a 2 GB memory for the camera. And the second I totally freaked out over when I opened it. 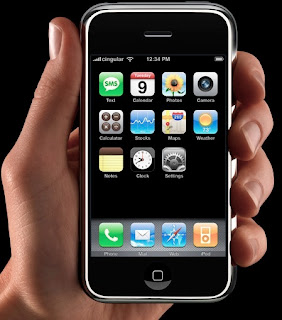 WOW! He did it again! Completely unexpected.

That's not all! This is a VERY special iPhone! Brian spent a lot of time researching iPhones and was able to purchase one of the first models brand new from Apples refurbished division online. From what he tells me those models are hackable and the newer ones are not. So, Brian, of course hacked it. Now I use T-Mobile on my beautiful, fabulous iPhone.

From what I've read, it was the gift of the year! 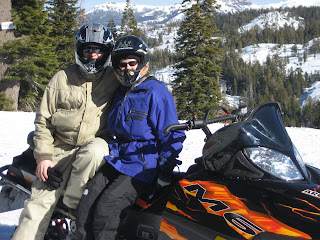 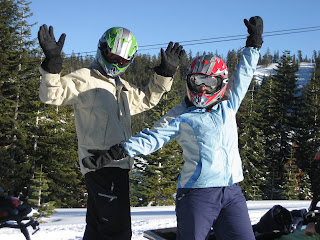 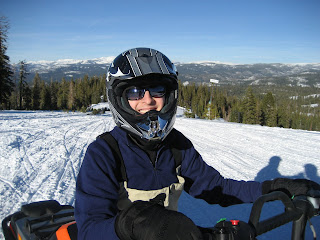 Look at that view! It was so gorgeous! And so is my hubby, of course!

Kayle, as always, was so wonderful and generous to take us out to play for a day on his toys. He started a cool business about a year and a half ago called Executive Style Boat Club, where he operates a membership based fun club...basically. I've never been snowmobiling so I was nervous but it was a lot of fun. One thing that I particularly enjoyed about this trip was where we went, Iron Mountain, a deserted ski resort. It felt a bit like a ghost town, but once you got past the boarded up lodge and onto the slopes it was absolutely beautiful. We were there the whole day and only saw maybe 15-20 people sledding or snowmobiling. The snowmobiling was thrilling and fun, but when others were riding out of earshot it was the most peaceful, beautiful place I have been to in a long, long time.

I also have to express extreme gratitude to Mom who so willingly and wonderfully watched Isabella ALL day. I've never been away from my little one so long, but Mom did a great job and it was a super nice mini vacation/long date.

One funny story about snowmobiling...
There were five of us and two snowmobiles that could each hold two riders. Sean snowboarded down the mountain and the rest of us took the snowmobiles down on a switchback path. We figured the three smallest of the bunch could fit on one mobile on the way back up the mountain. I was on the three passenger mobile...

On the way back up the mountain, as soon as we took our first turn, all three of us spilled off the snowmobile. We tried again and were pretty successful around a couple of turns. (Snowmobiling is really quite harder than it looks. It's just a sled with an engine, really.) After making it around a hairpin turn Brian, our trusted driver, picked up some speed. But we must have all been leaning a bit in the wrong direction because we all toppled off and the snowmobile kept going.

Even though the engine shut off the snowmobile still had momentum, snow, and gravity working against it. So, down the mountain it went. Kristen and I tried our hardest to run after it but we were no competition; with every step we would fall into the snow past our knees. There was a bit of a bump in the snow that I figured would stop the runaway snowmobile. It slowly reached the bump and slowly went over it, down the mountain even further, right for a tree. Finally...it stopped. The amazing part was, it never hit the tree! It was within three inches I'm sure, but never touched it.

A very fun adventure indeed!
Posted by Kiasa at 4:35 AM No comments: