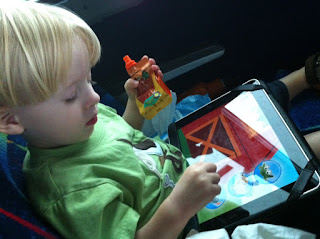 Right now I'm extremely grateful for fun kids apps on iPads and mess
free ways to feed my kids breakfast of the go. The app is Peek-a-boo;
Oliver's favorite right now. And we love the Trader Joe's carrot
applesauce squeezers.

We are headed to Connecticut (via MegaBus) to pick my years supply of
blueberries. 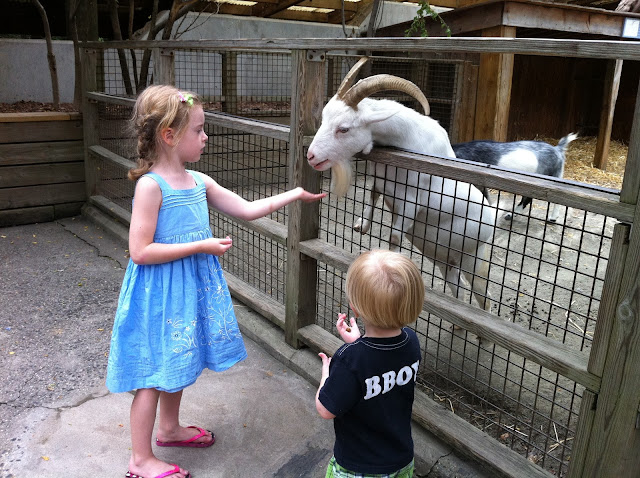 
Inspired by my favorite blog: SouleMama

One of those days.

Do you ever have one of those days when nothing seems to go right?
...when your patience is thin?
...when your stress is high?
...when accomplishing something (anything!) feels impossible?
...when you are so tired you fall asleep reading Moo, Baa, La La La?

Well, I had one of those days today.  It was a doozy.

Do you know what the best medicine is for one of those days? 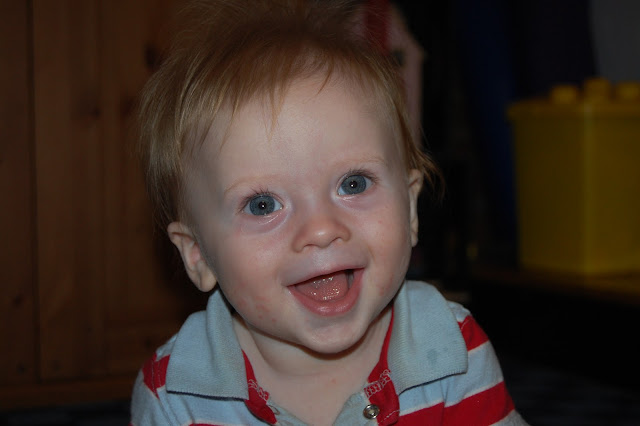 Gently pressing my fingertips into his very ticklish back
'til he squeals with delight. 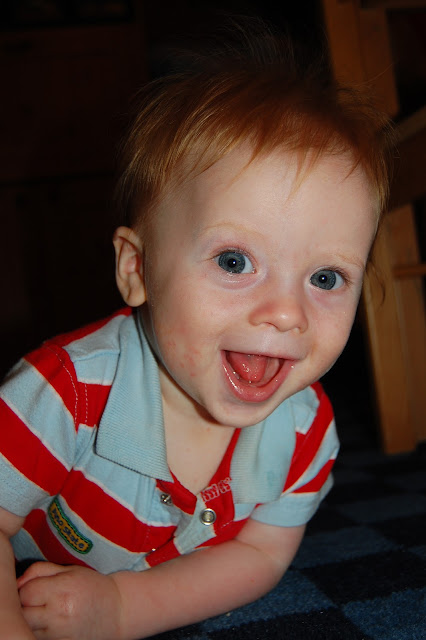 And remembering this is why I love my job so much. 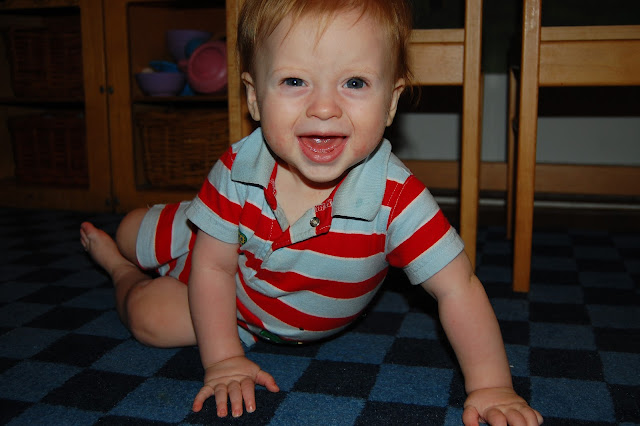 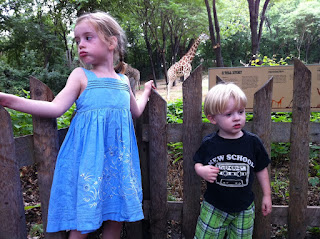 Enjoying a beautiful day at the Bronx Zoo.
Posted by Kiasa at 12:44 PM No comments: 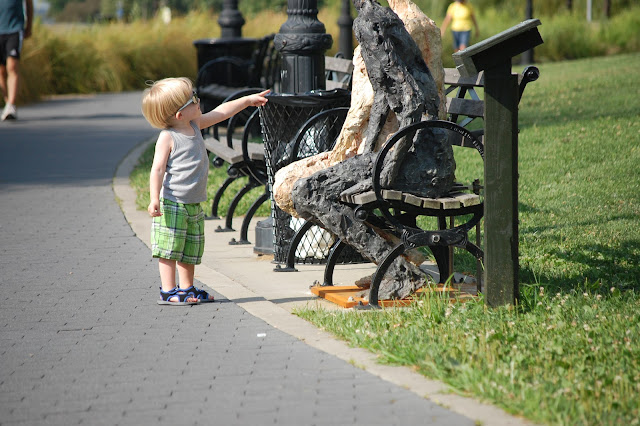 Inspired by my favorite blog: SouleMama
Posted by Kiasa at 1:15 PM 2 comments:

Every summer Lincoln Center puts on a very fun event called Midsummer Night Swing.  For about 3 weeks every night they have a large outdoor stage set up, dance lessons, big bands, etc.  Even though you have to buy tickets to get onto the dance floor many people come to listen and dance around the plaza.  Every summer we plan to go and every summer it comes and goes and we kick ourselves for not going.  But this summer we did it!  Brian and I got a babysitter one night and swing danced the night away.  Then last Saturday they had a kids dance and we took advantage of that (for only a little while since it was at 3pm on a scorching hot day!).  Another night we kept the kids up and tangoed on the plaza under the stars. 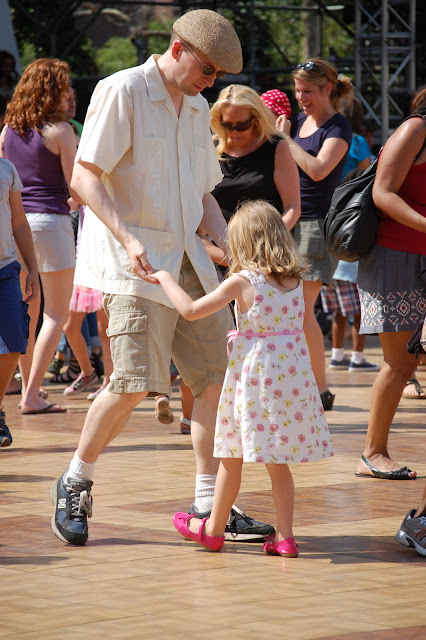 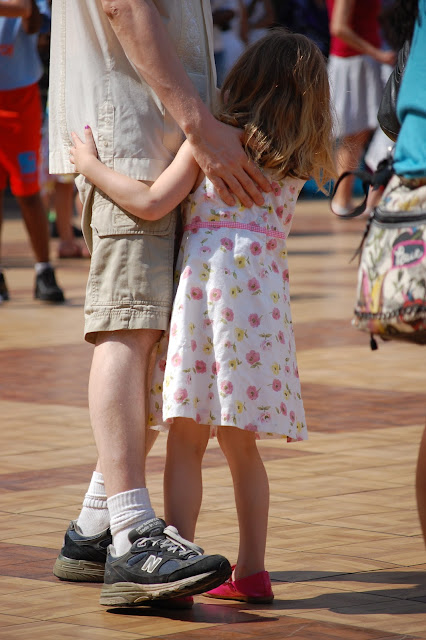 One of my favorite things about being a mom is seeing my kids completely adore their daddy.  It warms my heart so much!  I love it when they yell, "DADDY!" every time someone comes to the door (whether it is Daddy or not).

Oliver actually says, "Dada!  Dada!  Dada!" in a bit of a deep voice.  He loves his daddy so much!  Every time he hears Brian come up the stairs he squeals with delight, anticipating being scooped up and launched into the air.

Last Friday we met Brian at Pier 84 after he got off work and Oliver would not leave his side.  Here are some fun photos of that lovely evening. 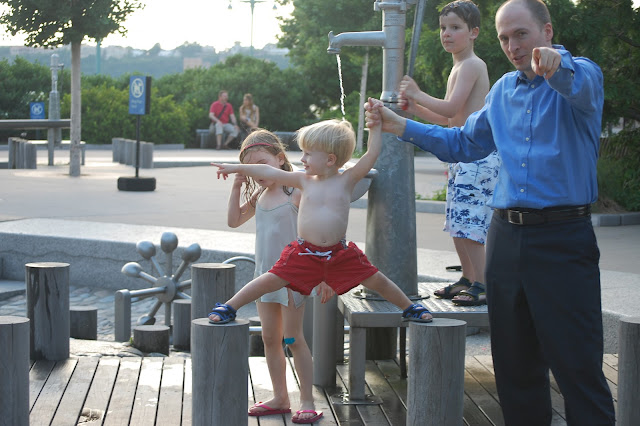 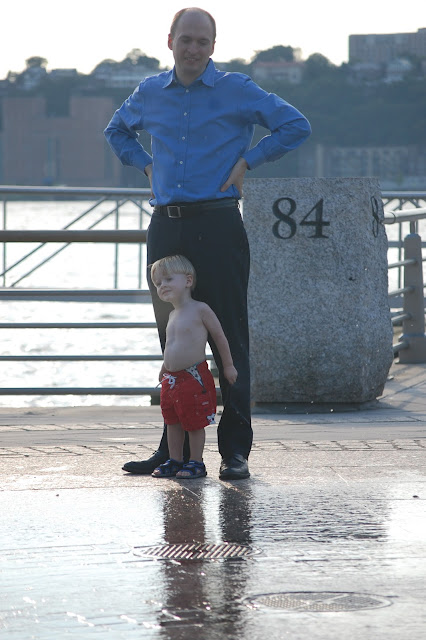 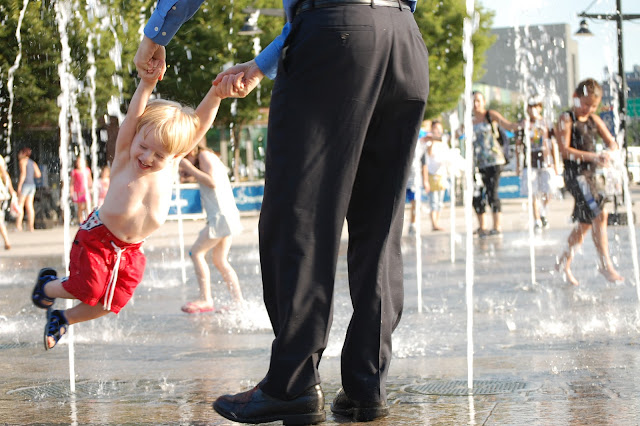 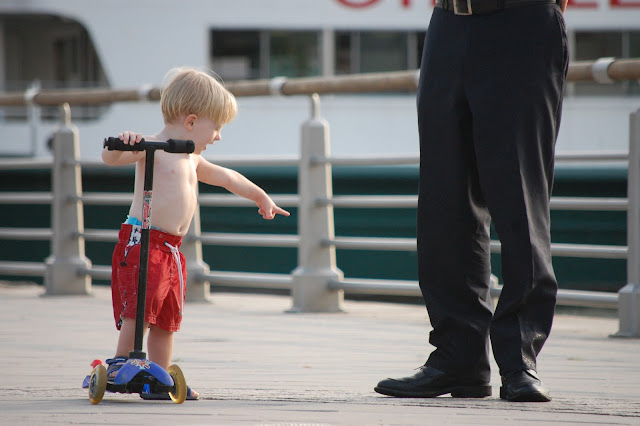 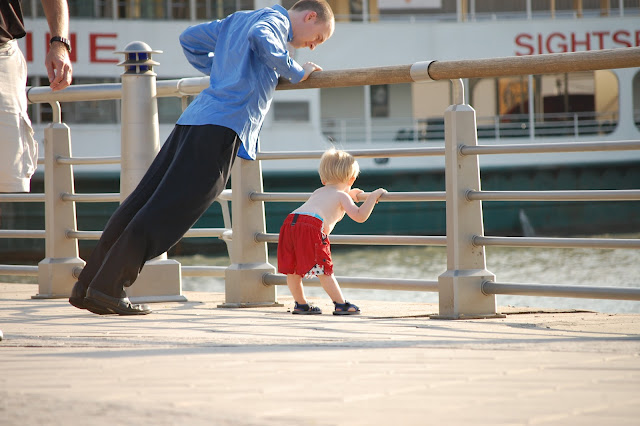 Back in May, or whenever the weather began to be beautiful, Isabella and I made a list of some of the fun things we wanted to do this summer.  We hung it on our apartment door.  The funny thing is we did almost all of them within about a month (all the X's are the ones we've done).  Today Isabella asked when we could make a lemonade stand.  With all this crazy heat I think we should do it soon. 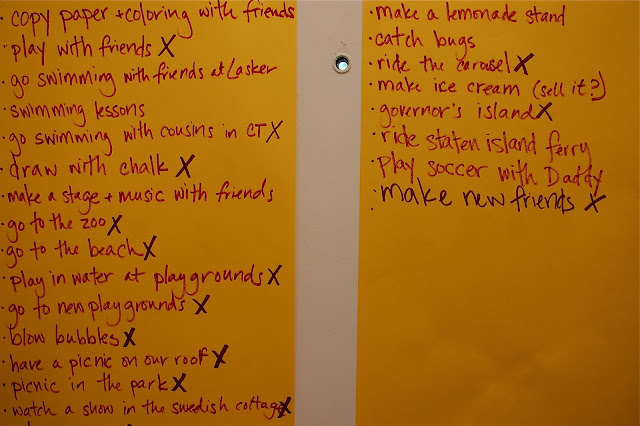 Email ThisBlogThis!Share to TwitterShare to FacebookShare to Pinterest
Labels: Summer 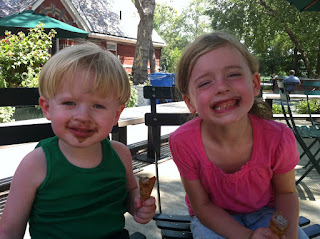 The sweet faces of summer. Aren't they delicious?!
Posted by Kiasa at 12:45 PM No comments: 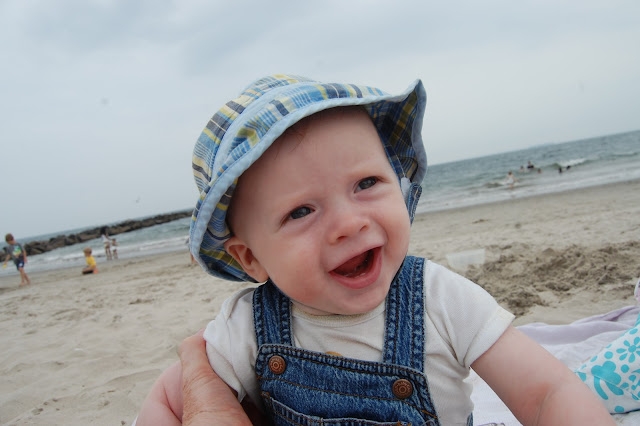 Simon is often called Silly Simon or Sweet Simon by those who adore him, and now I need to add Smiley Simon.  The kid will not stop smiling!  (I know, it is so difficult.)  He's almost mastered sitting up, but still will tip over on occasion. If he bumps his head he will begin to cry, then see me and smile.  Or Oliver might sit on him.  Simon will grunt look at me and smile as I rush to the rescue.  In the morning, as he begins to wake up, he starts to fuss, then finds a familiar face in the busy room and smiles.  It's perfectly wonderful having such as sweet, smiling baby.

He still rolls like crazy and has been caught pulling his knees up under him into a crawling position.  But lucky, for me, its only happened a couple times for a split second...so far.  He can also move from laying down on his back to sitting himself up pretty well.  It's impressive.

He's not fond of food, but willing to try it.  He gets super excited until the food item is actually in his mouth.  He then looks at me and tells me (with his eyes) that I must be crazy to put such things in his mouth.  And then he gags a bit.

We've reached beyond the 6 month bump and I feel like I am beginning to be normal again.  I get a few more hours of sleep sometimes.  And we are in our new normal groove.  I love it.  Life with Simon has always been perfect.  But this perfect is completely awesome.

In the last couple of weeks two different women (both were strangers--one just had her 3rd, the other about to have her 1st) have asked me advice, and told me I seem relaxed and wise.  I was surprised, but it felt good.

P.S. Simon currently has 6 teeth (4 on top, 2 on bottom) and another bottom tooth is about to pop out.
Posted by Kiasa at 2:02 PM No comments: 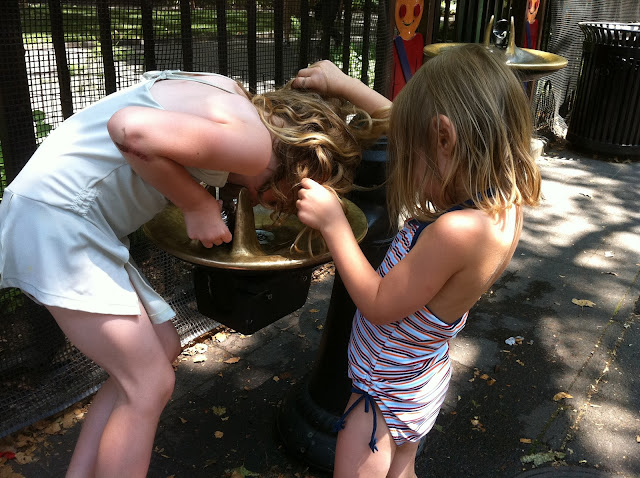 Inspired by my favorite blog: SouleMama
Posted by Kiasa at 12:54 PM 2 comments:

Email ThisBlogThis!Share to TwitterShare to FacebookShare to Pinterest
Labels: Summer, this moment

This morning we took advantage of one of the many fun, free things to do for kids in the city: soccer and basketball classes in Riverside Park for kids 5 and under.  Isabella had a great time, it wore her out (amazing!), and she made a new friend.  (They were holding hands and running all over the place together, it was adorable.)  Oliver acted like a two year old. 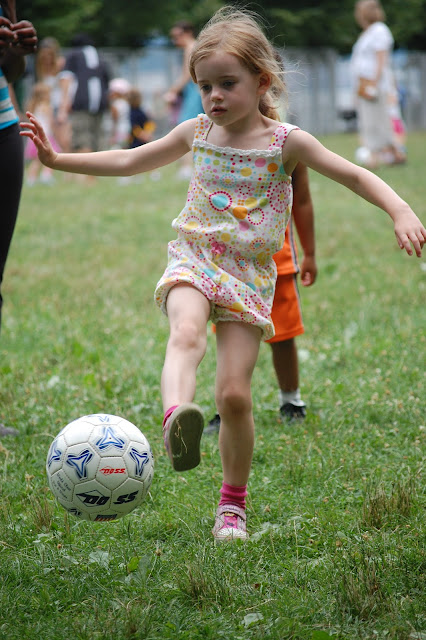 We spent the last couple of weekends at the Carini Homestead in Connecticut.  This is my favorite time of year to go visit.  I love to soak in the lovely rolling, green hills of the Northeast.  I fell in love with these hills just from photos I looked at as a teenager.  I use to day dream of visiting century old farmhouses, covered bridges, and rock walls.  And now I can do that every weekend; how lucky am I?!
Here's some of what we did the last two weekends:
Posted by Kiasa at 4:12 PM 1 comment: 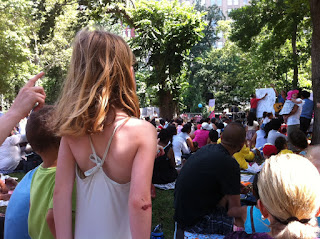 Enjoying the "pop ups" band at Madison Square Park.
Posted by Kiasa at 10:58 AM No comments: 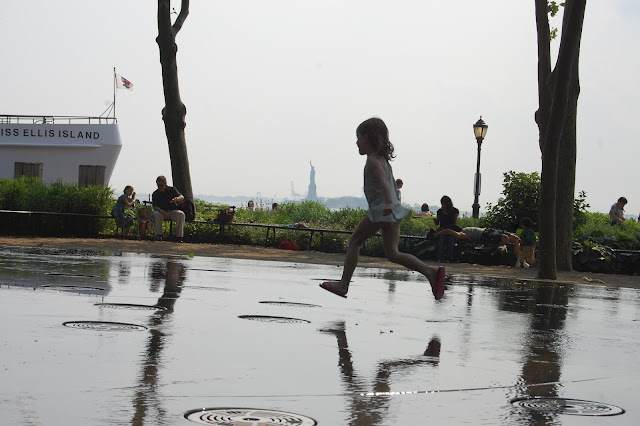 I just made my Summer Fun google calendar available for public viewing. It is not perfect and is a work in progress.  (Which makes me a bit hesitant to share it with all of you.  I have to fight some perfectionism tendencies at times.)  But I hope you use it

Just as a quick explanation: since there are so many fun, free things to do in the city this summer I had to narrow down and only put on the calendar things that I can possibly do with my kids.  These are events that are fairly accessible for us (i.e. on the west side of Manhattan), but there are a few exceptions. I tried to put a link to the event in the description section of the calendar, so you can check that for additional details (i.e. the location changes for some events, so find out where it is on that day). Summerstage has tons of fun stuff for kids but each event was at a different place/time with a different artist.  I don't have the time or patience to enter each one in, so I put one or two of their events that I thought we might enjoy. You should check out their site.

If you know of other events that you should be added, just let me know. I'm sure I've missed some.

A few, more general, fun summer things that I hope we will also do this summer:

I tend to bite off more than I can chew. As much as I'd love to do everything I am constantly learning how to find a balance.

Have fun with it! Let me know if you like it and use it for your summer adventures.