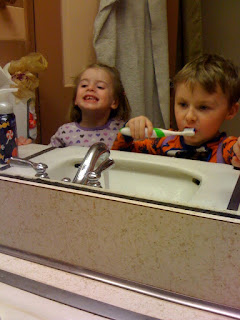 Getting ready for bed with cousin, Roman.
Posted by Kiasa at 8:41 PM No comments: 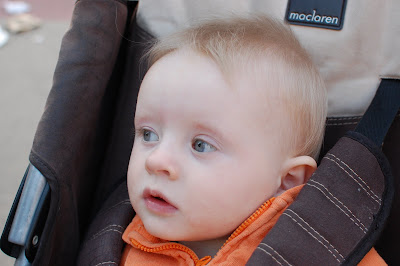 Eeek!  Oliver is on-the-move!  No, he's not crawling.  No, he's not scooting.  He just moves, ever so slyly.  It's freaky and funny at the same time.  He likes to sit on the floor and play with toys.  Whenever I glance over at him, he's still sitting, just in a different spot.  I try and watch him--catch him in the act--buy he just reaches for toys, twists around, stretches and reaches some more.  I look away for 2 minutes and all of a sudden he's right by me!  I jump, "Whoa, where did you come from?!"  He just smiles, his huge, gummy smile.  I'm totally excited for him.  At the moment he's discovering how much easier it is to get around on the hardwood floor rather than the carpets I normally plunk him down on.

Now I'm thinking I should really be cleaning.  He's gotten much farther today than ever before!

Yes, this is terribly late, and not a great photo, but I have my excuses.  I'll spare you...this time!

using his hands to communicate: waves "bye" and "all-done"
gets quite upset if you take something from him
loves to drink water, and spit it out
prefers watching his food fall to the floor instead of putting it in his mouth
laughs hysterically at his sister
often prefers sitting on the floor, playing with toys than being held
become more of a picky eater, but has fallen in love with cheese and crackers 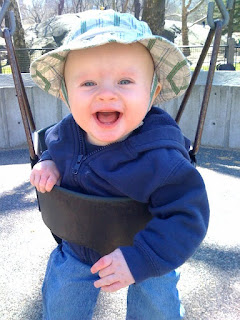 Oliver is completely giddy over his first time in the swing. He has
been laughing the whole time (about 10 minutes). Although, when is
this kid NOT laughing?!
Posted by Kiasa at 12:13 PM 1 comment: 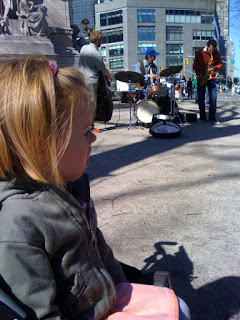 Enjoying Jazz and sunshine.
Posted by Kiasa at 11:06 AM No comments: 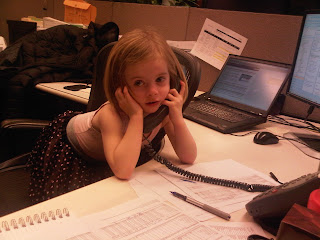 We loved spending the last four weeks with family in California, but
it feels great to be home. The kids are absolutely gleeful when Daddy
is around! (Me too!) Brian had to work a little late tonight so we
met him for dinner and Isabella "worked" at his office. In her
leotard and tutu, of course.
Posted by Kiasa at 10:46 PM 1 comment: