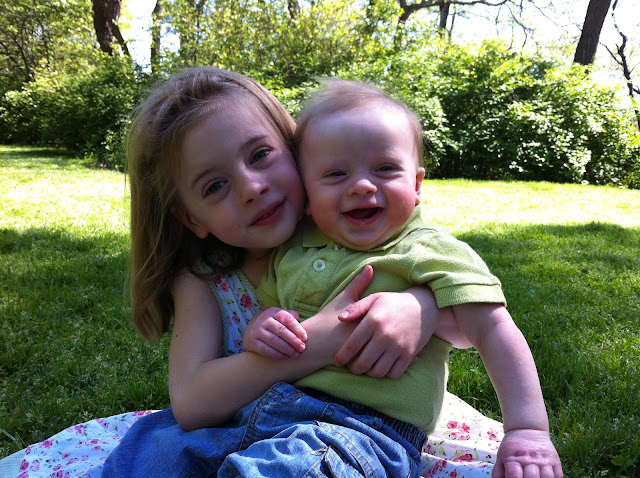 I know I say this all the time, but how is my baby already 5 months old?!  Time is moving too fast (except during the sleepless nights)!

Simon, in short, is a squirmer!  He loves to move, move, move.  And he's not even mobile yet!  Well, he rolls a little (from his back to his belly) and gets his arm stuck under him and complains until Isabella or I come help him.  He flexes and contracts his belly until he slips out of his bouncy seat or off our laps.  Yes, he moves a bit like an inchworm.  When the dance music is on he kicks to the beat.  When he's in his bouncy seat and gets excited he does moves resembling the electric slide.  It cracks me up!

Right now he's in my lap, his feet are propped and pushing against the desk and he's rhythmically slapping my arm with his right hand.

He loves using his new teeth (fortunately not while he's nursing) so we keep teething toys at arms reach.  But he prefers gnawing on my hand over any teething toy.

Simon is finding his voice.  In addition to ear numbing squeals, he "talks" very loudly, usually when we are trying to watch a movie.  During his long, loud orations he furrows his brow and acts very serious.

He is a very happy child.  Smiles constantly.  Just the other day as Isabella was hanging on me and moaning about her allergy pains (rightfully so), Simon (in my other arm) looked at her and started laughing and squealing with delight.  It helped her out of her funk and lightened my mood.
Posted by Kiasa at 7:49 AM No comments: