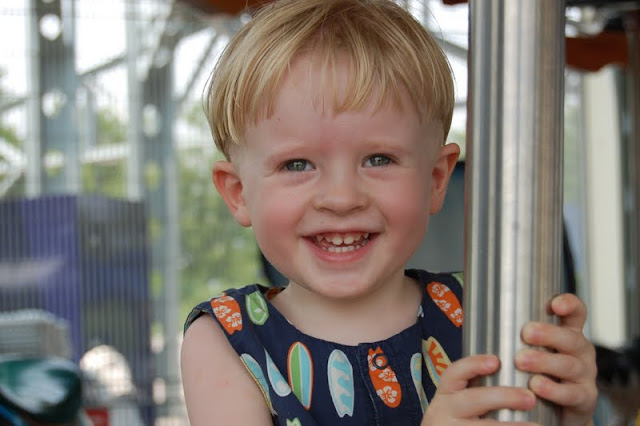 How can Oliver be two years old already?!  He's still as adorable as ever!  (Except maybe a few times this last week.  He's making sure I know he is a two year old!)

When this little boy was born two years ago I knew I'd love him with all my heart, but I had no idea what awesome joy he would bring.  He's such a happy boy.  I remember at only 4 months old he would crack up when we just looked at him.  Many people are drawn to him and his cheerful demeanor.

Lately he really loves his brother, Simon.  If Simon reaches out to Oliver and touches him, Oliver cracks up and then stands close so Simon will do it again.  When ever Oliver sees the letter "s" he says, "ssss" and then points to Simon.  Isabella knows Oliver's ticklish spots and often gets him to laugh and scream (happy) while he's strapped in the stroller and can't get away (usually while we are in a crowded subway car).


Oliver is very good at:

He recently went on a see-saw for the first time.  He loved it!  He could-not-stop-laughing.  At one point he laughed so hard and long he couldn't breathe.  His face turned red.  His worried wide eyes searched my face, and then he gasped.

He doesn't use many words yet (most things are labeled as "da" or "na"), but he can communicate quite well.  He will often string 4-5 signs together to help us understand, pull us, point, etc.  Words he uses: Mama, Dada, Lelela (Isabella), eesh (cheese), ow (water), ca-ka (chicken), boe (shoe), moooe (no).

He's become a picky eater but loves his breakfast.  He can down a Papa Bear sized portion of oatmeal or 4 eggs in one sitting.  But then he may not eat much the rest of the day.  He usually likes chicken.

Despite his extremely happy demeanor he definitely has a bit of strong headedness.  The last two weeks he's begun screaming (bloody-murder type) when he doesn't get his way.  Like yesterday, when we were at Isabella's (future) school office filling out some paper work.  It was, of course, very quiet.  He didn't get his way.  And he was angry.  His face turned bright red and he screamed!!!  For an entire minute (I'm sure).  All my attempts to calm him failed.  I turned red too (with embarrassment).  I was so uncomfortable that I began laughing nervously.  (So, no Grandma, he's not a perfect angel!  :0))

I really love seeing him grow.  I can't wait to hear what he has to say this next year.

Oliver, we love and adore you.  You are such an amazing little boy.  I am so happy to be your Mama!