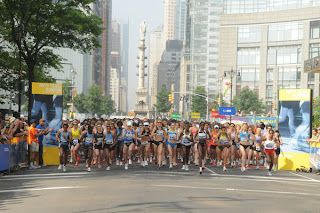 Can you see me?

On Saturday I ran my first race of the season, the NYRR New York Mini 10K, a women's only race. It ended up being the hottest day of the year (so far) and very humid. I thought I would average just under 9 min/mile since my longest runs this year were only 4 miles and I figured the heat would slow me down. But I did really, really well.

The best part of the whole race was around 2.5 miles. I had just conquered the huge hill of Harlem Hills and was heading down when I spotted Isabella on top of Brian's shoulders. I waved and blew kisses as they cheered me on. I loved it more than anything!
Posted by Kiasa at 7:21 AM 3 comments: