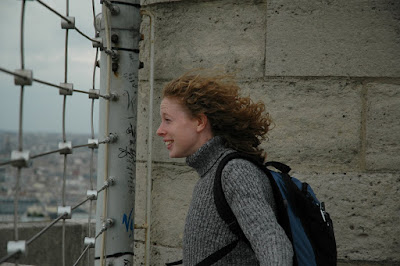 At the top of Notre Dame, Paris

Tuesdays at TravelinOma's "Back to School" are dedicated to travel, this week's assignment:
How has travel changed you? Prompt: After I went to ____, I felt differently about ___.

Almost all of our travel has revolved around visiting family, but for a few years, way back when, we saved and saved and somehow scored the greatest flight deal ever. Soon after 9/11 American Airlines offered a sweet deal: travel twice between New York and California or Florida and you received a free flight anywhere in the world. We contemplated Australia or Brazil, but settled on a less exotic, but still adventuresome Europe. Specifically Paris and Italy--for a month. Other than going to Canada twice (just over the border) it's the only time I've left the US.

It was a fabulous trip; we had a great time, ate the most delicious food, and saw some amazing sights. But I will always remember two instances that really changed my perception of my own country and my immature view of the rest of the world. When we rented an apartment for a week on the island Ischia we stopped by a tiny market to pick up some groceries. The woman running the store was sweet and wonderful. She did her best to help us purchase what we thought we needed. A couple of locals wandered in and out. A short, old man, wearing a fedora, smiled at me and asked, "Bush or Kerry?" I was pleasantly surprised that someone on an island out in the Mediterranean knew as much--possibly more, looking back--about the elections being held in my country. I had no idea who the president of Italy was! I don't think I knew who the president was of any country--except my own. But this happy old man did. It was humbling.

The second instance was when we were staying a couple of nights in Amalfi. One morning as Brian showered I watched a BBC special on television. They were featuring a story on North Korea and their hatred toward the US. This was one of those exclusive interviews, "never seen before footage" sorts of stories. I knew North Korea despised America, but goodness! Young children at school reciting, in unison, hateful rote. Billboards claiming all Americans must die. The hatred so deep, so thick, so impenetrable. It was a real eye opener for me. I learned a lot during my travels that month and I'm the better for it.
Posted by Kiasa at 1:50 PM 4 comments: