Lately my littlest one is getting into everything.  Kitchen items strewn everywhere.  Garbages have to be lifted up onto tables.  Baby gates are up.  And the bathroom door must be closed "quickly, before he gets there".

He loves to pull himself up to a stand and declares, in sweet squeals, that he is quite proud of himself.  Although after a few recent tumbles he has become more cautious and now stands, and stands, and stands until someone rescues him and helps him sit back down. 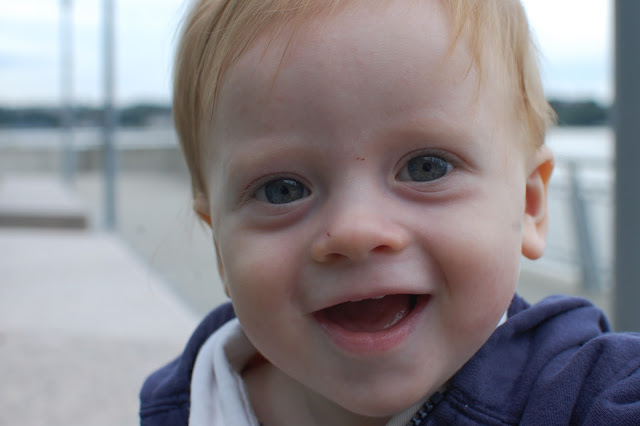 About a week, or so, ago he started clapping.  I was so excited, and I kept trying to get him to show off for everyone else...but he wouldn't.  He just looked at me, like I'm totally hilarious, then grabbed my hands and tried to eat them.  But, when no one else is looking, he loves to clap.

He's got ninja hands.  It's true.  As in, I'm about to put the spoon, full of baby food, into his mouth and all of a sudden the food has flown everywhere.  We just need to teach him to say, "hi-YA" and it would be official.  He's so fast!

I love this stage!  He thinks we are all hilarious.  Peek-a-boo is awesome.  Chasing is the best game.  And he still loves to cuddle with his mama.  I love kissing his neck.  I love nursing him.  I love holding him.  I love tickling him.  And counting his petite pea toes.  And squeezing his plumpness.  I love watching him laugh at his brother and sister.  I love this boy!!!

Yesterday evening we had FHE at Sheep's Meadow.  As Brian chased Oliver during that it's-almost-time for-bed-naughtiness-phase, I finally captured a bit more of Simon's expressions (and yes, he is still in his pajamas because he is a 3rd child...but I have photos!):