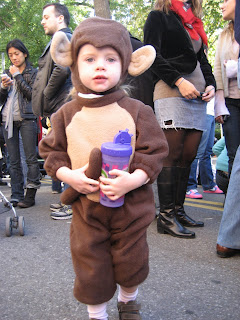 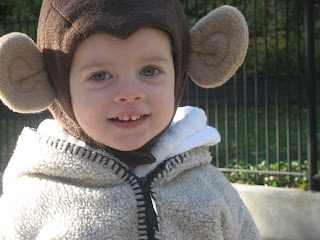 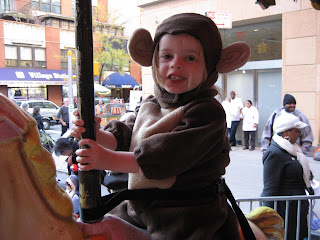 My lovely, talented sister let us borrow the monkey costume she made for her kids. There were a whole lot of monkeys in the parade, but they were all exactly the same...except Isabella. Yeah for homemade! 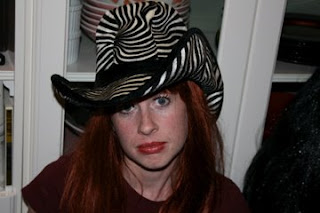 Brian and I went as rockstars. We, of course, forgot to take photos with our camera. Luckily we have friends with cameras. Above photo is by Rebecca and we are still waiting on others.

Halloween was fun! We packed a lot into one day and were exhausted when November hit!

I wish I had taken photos of everything, but I only captured a couple of moments of the day.

--We met up with Beth and Morgan at the playground.
--Ate pizza at Angelo's in Midtown with a good friend who recently moved to the city.
--Met Brian for his lunch break at some swanky Bon Appetit shin-dig.
--Walked from Midtown to Washington Square Park (a long walk, if you're not familiar).
--Participated in the 15th Annual Greenwich Children's Halloween Parade around the park. (Marched with Gwyneth Paltrow. Yes, the real one.)
--Rode the carousel at the carnival (located at the end of the parade). It took about an hour of standing in line and I was regretting that I said 'yes' to Isabella's pleas to ride the "forse", but she still talks about it everyday. She loved it and that makes it all worth it. :)
--Left the Village a little late and had a horrible time fitting onto a train during rush hour.
--We all got into costume and went to Marci & Dan's for a fun party.
--Brian and Isabella danced until 10pm attempting to get Isabella off her sugar high.
--Yes, it worked. We all slept well.
Posted by Kiasa at 3:11 PM 3 comments: 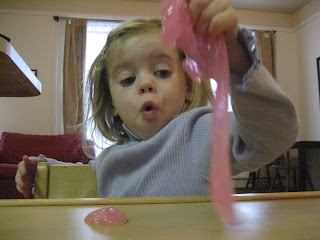 Isabella found my stash of glow-in-the-dark slime. She begged, "want some, want some," and I gave in. We had a lot of fun playing with the goo. And she only tried to put it in her mouth once.
Posted by Kiasa at 3:04 PM No comments: 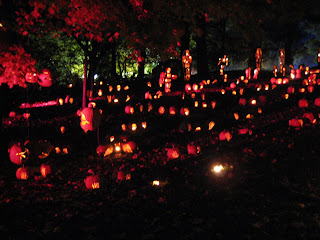 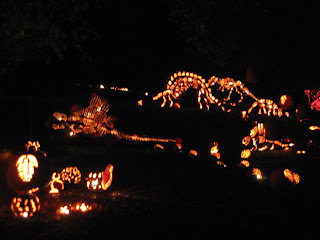 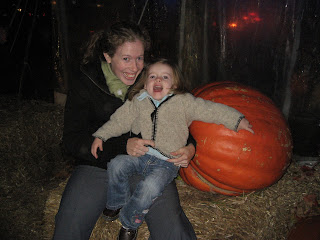 It's been a while and I have a bit of catching up to do. Let's see how much I can post before Isabella wakes up from her nap.

The Monday before Halloween we got outta the city and took a lovely drive up the Hudson River to Van Courtland Manor where we went on a fantastic tour of over 6,000 jack o'lanterns all lit up (after sunset). It was a fun, fabulous display that got us in the Halloween spirit. They call it The Great Jack O'Lantern Blaze. And blazin' awesome it was.

Thanks Ashley for suggesting it, we loved it!
Posted by Kiasa at 2:53 PM No comments: